Dealing with Loss as a Teen or 20 Something

As a young woman in her 20’s, Lauren Muscarella thought she had done well in coping with the death of her 51 year old mother from breast cancer.  She became highly focused on her studies in Art, Literature and Creative Writing, her career, and her future.  But two years after her mother’s death, Lauren found herself in a low place.

Unable to understand why she was so depressed when things appeared to be going so well, she sought professional counseling.  During this process, it became clear to Lauren that she hadn’t learned to cope with the loss of her mother, or her grief, at all.  She had merely avoided dealing with it.  But now the unresolved emotions had built up inside of her and she could no longer avoid them.  She had to confront her sadness.

Lauren’s story isn’t unique, in that, many teen and 20-something’s who lose one or both parents find little help or guidance in coping with their grief.  People in general often tend to suffer in silence, but losing a parent as a young person can create even greater isolation.  There is a tremendous amount of uncertainty about the future, and a heightened sense of loss and abandonment.  And without the benefit of years and other solid relationships in their lives, many young people avoid dealing with their emotions, just like Lauren did.

What is unique about Lauren is that her experience inspired her to help other young people traveling that same road of loss and grief by writing a book called Alice’s Law, named in honor of her mother.  In the book, she shares her own story, encourages young people to choose the tougher path of confronting their loss, and urges them to be brave as they walk the difficult journey towards healing. 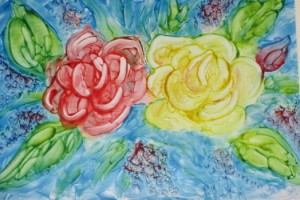 Additionally, she’s using her talent and degree in art to help other young people find a voice and expression for their sadness.  She’s created an organization called Trauma to Art: turning grief into creative expression http://www.traumatoart.org/.  Here she is able to help others (artistic or not) find insight, honesty, understanding, compassion, and empathy for themselves and others through artistic expressions such as painting and writing.

With so few resources available, Lauren’s organization is one that fills a genuine need in our society, and we encourage all young people who are grieving to check out her website today.  You are not alone.  There’s a large community of others just like you, who share your experience, and are waiting to support you through your grief.