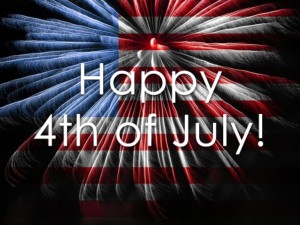 For most of us, the 4th of July means barbecues, parades, concerts, baseball games, and fireworks.  But as we know, there is a much deeper meaning to this holiday that we sometimes fail to acknowledge.

Independence Day (which we more commonly refer to as the 4th of July) was, and is, an important day in our nation’s history, and our future.   Prior to July 4, 1776 US territories were known as colonies under the rule of British Parliament.  But the people living in the colonies had simply had enough of British domain–working and living for the pleasure of the King.  They felt as though they were indentured servants, and they wanted something more—something better, for their lives.

In that way, they were just like us.  Or more accurately, we are just like them.  We are the same as those who lived centuries before us.  We continue to strive for something better for ourselves.   But it was the action of the Colonials that made it possible for us to do this.

When the colonies made the decision to be free from Britain, and govern themselves, they penned what we know today as the Declaration of Independence.   Many believe one of the most important statements ever made in the history of our nation came from this document.  It said:

“We hold these truths to be self-evident, that all men are created equal, that they are endowed by their Creator with certain unalienable Rights; that among these are Life, Liberty, and the pursuit of Happiness.”

Powerful words!  But they are only words, unless we act on them.   In spite of the tensions we’ve experienced here and across the globe, we should always strive to remember our roots.  We are all created equal.  We are free.  And we are one.

This July 4th, enjoy the life, liberty, and pursuit of happiness afforded to us through our founding fathers.

Have a Safe and Happy Independence Day!