The Story of Adreian Payne: An inspirational story of life after loss

Stories of life, love, loss, and inspiration are often found in the places we least expect.  One such story comes from the world of college basketball, and whether you’re a fan of the sport (or not), you surely will be a fan of the story of Adreian Payne.

Adreian was born in Dayton, Ohio.  His family lived in what was considered to be a violent and depressed neighborhood.  They struggled to make ends meet. By the time he was five, his father, Thomas, was arrested and convicted for the sale and possession of drugs, and was sent to prison for three years.  He never returned back to the family home. 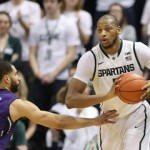 Adreian’s mother Gloria became a single mom and worked exceptionally hard at making a life for herself and her children.  One day, while making fried chicken—her son’s favorite meal—the smoke became overwhelming for her. Adreian saw his mother step out of the kitchen and labor up the stairs to her bedroom.  He followed behind to make sure she was alright.  Gloria had a long history of asthma and was suffering a terrible attack.  She opened the window, hung her head out, and tried to slow her breathing while pleading for her inhaler.  Adreian fished through drawer after drawer, but said “I can’t find it mama!  I can’t find it!”  Gloria stepped away from the window and collapsed on the bed.  Not knowing what else to do, Adreian cradled her in his arms as his mother took her last breath.   He was just 13 years old.

After that, Thomas tried to take a more active role in his son’s life, but it was Adreian’s grandmother, Mary Lewis, who became his legal guardian.  She was a strict disciplinarian who Payne credits for keeping him from the temptations of his neighborhood—drugs, crime, gangs.  She took him to church and helped him to establish a foundation of faith in his life.  He loved going to church and took comfort in the love and acceptance he felt there.  Mary taught him right from wrong, and though she was tough on him, she loved him with all her heart.

While in the ninth grade, Adreian recalls one of his teachers asking “What is your Plan A in Life?  And if you can’t do that, what is your Plan B?”  Payne thought for a moment, and had no response.  While others around him had some idea of what they wanted to do with their lives, he had none—no plan A, let alone a Plan B.  He had learning disabilities and had never been a good student.  He didn’t even know how to read, and was often made fun of because he was so slow.  He had no aspirations.  After all, what kind of life could a young man with no mother, an absentee father, severe learning disabilities, and an inability to read expect?

But Mary continued to seek help for her grandson, and encouraged him in his studies.  A couple of his teachers took special interest in him too.  They taught him how to read and worked with him on his class work.  At long last, Payne’s life seemed to be moving in a positive direction.  He had also experienced a growth spurt during this same period, and made the Jefferson High School varsity basketball team.

Adreian was coming into his own.  He had become a solid high school basketball player and now college recruiting letters were coming in from all over the country.  But with his academic struggles, Payne would have to work ten times harder if he was going to play for any college basketball team.  Tom Izzo, the basketball coach at Michigan State University in East Lansing, was interested in recruiting Payne. Although Payne was interested in playing for Michigan State, Coach Izzo wouldn’t accept the player into his athletic program unless he could cut the academic program as well.  Unfortunately, Adriean failed to make the required college entrance scores on his ACT test.  His teachers went back to the tutoring room drawing board, and after much intense study and a couple more attempts at the test, Adreian finally achieved the required ACT score, and was on his way to Michigan State after graduating high school.

As a college player, Payne was making a name for himself, working hard at the game and at his academic studies.  But last year, his junior year, he experienced another setback.  He had gone back home to Dayton for a visit.  On his final day at home, he took his grandmother out to a movie, and to lunch.  Later that day he packed up his car and headed back to college.   Mary stood on the porch watching her grandson leave until he was out of sight.  She had never done that before, she had always just waved to him from inside her screen door.  That evening, Adreian received a sad call.  His beloved grandmother had passed away from an asthma attack, just as his mother had.

Yet another loss in his life could have derailed him.  He had no mother, no mother-figure, an absentee father, was not close to his siblings, and had to work harder than anyone else on his team academically to stay in the athletic program.  He thought about giving up and walking away from it all, and who could blame him?  His heart was broken, and the grief from a lifetime of loss was almost more than he could bear.  But instead, Adreian applied the lessons his mother, grandmother, pastor, teachers, and coaches had instilled in him…and he fought back.  As he finishes his senior year, he is expected to be a first round draft pick for the NBA–a status few can achieve in the best circumstances, let alone all Payne has experienced.  Once again his future is looking bright. 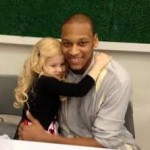 He even started reaching out and volunteering in the East Lansing community, and has befriended an eight year old girl named Lacey   and  her family.  Lacey has neuroblastoma, a rare form of brain cancer, and is undergoing treatment.  Her prognosis is uncertain, but she has always loved watching Adreian play basketball.  He calls her princess Lacey, and he is her hero.  He is committed to being there for her and her parents, and considers them his new family.

Maybe you’ve lost someone close to you, or multiple people close to you and you’re feeling like you just can’t go on.  There is no future.  There is no happiness.  And challenges face you each and every day.  Know this is only a feeling; it is not truth.  Life provides us with many chances for happiness, if only we will reach out and take them.  Find encouragement and inspiration for your own life today through the story of Adreian Payne.