On the morning of September 11, 2001, citizens of the United States were waking up to the clear blue skies and balmy temperatures that had blanketed the nation.  By 8:46AM (EDT) the beauty of the day would be consumed in a thick cloud of black smoke,  burning rubble, and carnage.  The events shattered lives and brought down buildings, but our spirit of resilience stood stronger than ever. 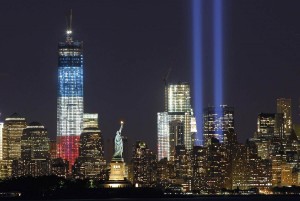 Twelve years ago, and what seems like just yesterday, four commercial airliners filled with passengers were hijacked by the Islamic terrorist group, al-Queda, to carry out the greatest act of terrorism ever committed on US soil.  The planes became a part of four coordinated attacks.  One targeting the Capitol building in Washington, DC, crashed into a field near Shanksville, Pennsylvania after passengers tried to reclaim control of the plane from their hijackers.  Another hit the Pentagon, and two others crashed into the twin towers of the World Trade Center in New York City.  For those old enough to recall, images of that day will forever be etched in our memories.

In the days and months that followed, our hearts were broken by the daily reports and rising death tolls.   When a final accounting was declared nearly 3000 had lost their lives on that fateful day.  Yet the stories of courage, bravery, and heroism that emerged from the ashes somehow lifted our grieving spirits, and gave us increased determination to move forward both as a nation and as individuals.

While the towers burned and pandemonium ensued around them, total strangers worked to help one another to safety.  Many who had been severely injured recall linking arms with unknown passersby who would not let go until they had dropped them at a safe place where they could receive proper medical attention.  First responders—policemen, paramedics, and firefighters displayed unimaginable acts of heroism by putting aside regard for their own safety and lives in order to save the lives of others.

Because of their example, this day, this time in our history has been memorialized as a day of good deeds and service each year since 9/11/2001.  Citizens may join in by formally pledging to do a good deed on the 9/11day.org website  (http://www.911day.org),  or can simply choose to do a good deed anonymously.

The late Fred Rogers, host of the long running children’s show Mr. Roger’s Neighborhood once eloquently shared the importance of good deeds with his viewers, stating  “When I was a boy and I would see scary things in the news, my mother would say to me, ‘Look for the helpers. You will always find people who are helping.’ To this day, especially in times of “disaster,” I remember my mother’s words and I am always comforted by realizing that there are still so many helpers – so many caring people in this world.”

The tragedy of 9/11 continues to teach us the importance of caring for those around us, and that even in our darkest hours of loss and grief, when we help others we somehow help ourselves.

One month after the attacks, then President George W. Bush stated,

The staff at Krause Funeral Home wishes to send continued condolences to the families who lost loved ones in the attacks of September 11, and wishes to thank the citizens, first responders, volunteers, and armed forces for their exemplary service to the people of the United States of America.