You’re In the Driver’s Seat 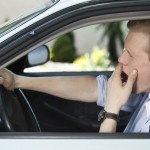 The old colloquialism “Rules are meant to be broken” may be true in many cases, but not all.  Some rules are, indeed, meant to be kept—especially those rules that help save lives.

Take for instance The Rules of the Road.  Motor vehicle crashes are the leading cause of death for those between the ages of 1 and 54, and the problem is getting worse.

Last year in the greater Milwaukee area there were 79 crash-related fatalities; a relatively low number compared to previous years which numbered in the 90s.  However, just a few short months into 2015 we’ve already exceeded that number.  To date, there have been 114 fatal crashes—practically doubling the total from last year.

Sadly, more and more people are disregarding the “Click it or ticket” rule.  Wearing a seat belt should never be a “maybe I will, maybe I won’t” option.  Yes, they can be uncomfortable and confining, but ultimately they’re designed to protect.  Statistics gathered over decades from emergency rooms across the nation prove that wearing seat belts reduces serious crash-related injuries and deaths by about half.  Half! Such a simple thing to do can save so many lives, so please, buckle up.

As an extra added measure, here are a few more driving safety tips to remember:

Whenever we get behind the wheel, our focus should first and foremost be on getting to our destination safely.  As the summer months approach, more and more of us will be hitting the road.  Buckle up.  Drive smart.  Stay safe.