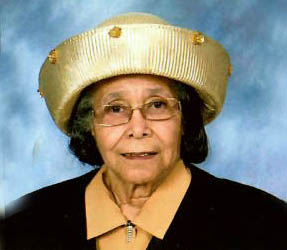 Freddie Dandridge was born October 4, 1929, in Red Bank, Mississippi, a blessing to Julia and Edgar Boggins and the precious niece to Mrs. Lucille Malone, all three have preceded her in death.

She received Jesus as her Lord and Savior at an early age, which was witnessed by the Mt. Pisgah Baptist Church, Olive Branch, Mississippi. She was united in Holy Matrimony to the late Deacon Carl Dandridge, Sr. To this union one son, Carl, Jr., was born.

Moving to Benton Harbor, Michigan, with her family, she united with the Progressive Baptist Church under the leadership of the late Rev. Daniel E. Cooks. Sister Dandridge served as a member of the Old Matrons of the Missionary Society. Later, upon moving to Milwaukee, Wisconsin, the family united with the New Hope Missionary Baptist Church under the leadership of the late Rev. R. L. Lathan (now under the leadership of Dr. Archie L. Ivy, Pastor/Teacher), where her husband Carl, Sr., served as a Deacon and she served as a Deaconess and Vice President of the General Missionary Society. Later in life she continued her work of kingdom building at Pilgrim Rest Baptist Church, where she shall be long remembered for her fervent prayers and generosity of spirit as she served with the Ester Circle of the General Missionary Society. Sister Dandridge returned to New Hope Baptist Church, where she remained until her passing.

Per family wishes, it will be a closed casket and no repast will take place. Family also asks that you wear masks. Service will be recorded and available on the funeral home website the following day.

To leave a condolence, you can first sign into Facebook or fill out the below form with your name and email. [fbl_login_button redirect="https://www.krausefuneralhome.com/obituary/freddie-dandridge/?modal=light-candle" hide_if_logged="" size="medium" type="login_with" show_face="true"]
×