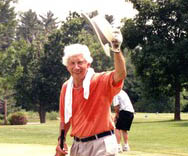 Born to Eternal Life on Saturday, December 10, 2022 at the age of 94, after years of complications from heart disease.

George was preceded in death by his wife Pamela, his parents Ewald and Helen, sister Betty and his brother William.

George is survived by his son Peter (Eva Marie), grandchildren Joe, and Kerry (Nicholas) and many nieces.

George was born in Kenosha, Wisconsin. His teenage years were spent in Germany as his family moved there when he was 10 years old. At age 20 he moved back to Wisconsin where he spent most of his life living in Milwaukee.

He was a veteran of the Korean conflict where he honorably discharged with the rank of Staff Sergeant.

After working in several different fields of employment, George discovered the water treatment industry thru a friend and spent the next 50 plus years making people’s water better. This was his passion. He owned Butler Soft Water until he retired at the age of 87.

George’s other passions were fishing, golfing and skiing in his younger days. He made many lifetime friends doing the things he loved along with many memories.

George will be remembered and greatly missed by his family and friends.

Until we meet again, keep your fishing rod tip up and keep rolling in those 20-foot putts.

To leave a condolence, you can first sign into Facebook or fill out the below form with your name and email. [fbl_login_button redirect="https://www.krausefuneralhome.com/obituary/george-r-schneider/?modal=light-candle" hide_if_logged="" size="medium" type="login_with" show_face="true"]
×