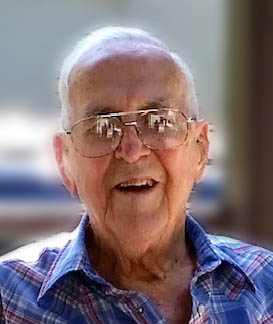 Henry (Bud) Wilcox got the party started in heaven on January 26, 2020 at 96 ½.  A native of Iron Mountain, MI, Bud was one of four brothers that served in World War II.  Bud served in the Navy as a seaman 1st Class guarding merchant ships in the Atlantic and had three ships he served on that had been torpedoed and sunk. The first ship off of New York City, followed by Brazil and Newfoundland. A superstitious lieutenant ended his Naval service prior to him boarding his fourth ship.  Over the course of two wonderful marriages, to Lucille Nee Olson and June Nee Maas, Bud had five children, Barbara Zoeller, Jimmy (Obie), Billy (Debbie Joe) Hutwagner, Ken (Lanie) and Kevin (Donna).  Bud worked for 32 years for Milwaukee Public Schools (MPS) as a Sheet Metal Laborer with a variety of specialties ranging from Swimming Pool Inspection to Parts Removal to checking in on Grandchildren during school hours.  Bud formed lifelong friendships from his time with MPS. Upon retirement in 1983, he and June moved to Princeton, WI, where he served as an Alderman and held various leadership positions in the VFW (Veterans of Foreign Wars) Post #10452, and St. John’s Lutheran Church.  Bud prided himself on his popcorn making skills at the VFW and lamented how he never won the Friday Raffle. June passed in 2005 and he remained in Princeton. Bud’s family is eternally thankful to the many friends he had in Princeton for looking after him in the years after June passed.  Bud moved to McKinley Place in Cedarburg, WI in 2017 where he was an avid bingo player, and when the numbers did not roll his way, he would refer to the game as “terrible”. Bud lived a life full of laughter, family, dancing and great times.

The family thanks the dedicated staff at McKinley Place for their patience and love for Bud and Allay Hospice for their compassion in Bud’s final days.

A celebration of Bud will be held on Friday, January 31, 2020 at Krause Funeral Home, 21600 West Capitol Drive, Brookfield, Wisconsin.  Visitation will be held from 11:00 AM to 12:45 PM with a service to follow at 1:00 PM. Interment will be at Pinelawn Memorial Park where Bud will be placed “head to head” with his beloved June.

Some say that when someone is unique that they ‘broke the mold.’  In Bud’s case, when the Angels were set to break the mold, God stopped them and told them to save it for when they need the next amazing Grandpa.

To leave a condolence, you can first sign into Facebook or fill out the below form with your name and email. [fbl_login_button redirect="https://www.krausefuneralhome.com/obituary/henry-bud-wilcox/?modal=light-candle" hide_if_logged="" size="medium" type="login_with" show_face="true"]
×