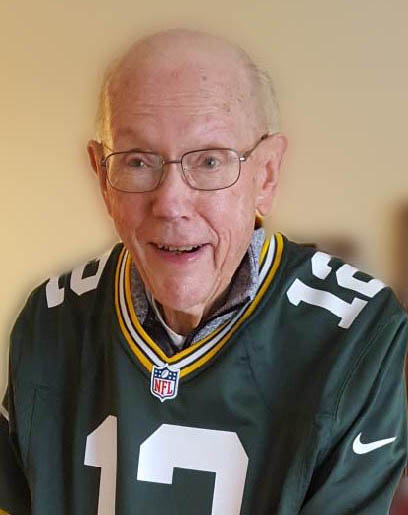 In lieu of flowers, Memorials appreciated to the American Council of the Blind.

Born in Milwaukee, Wisconsin, Jim grew up in the midst of the depression, raised with values, which he lived by and one day instilled in his children, and they in turn in theirs.

A hard worker his entire life, he started his career with Ma Bell, devoting over 45 years to the company and the people it served. An Army Veteran, he proudly served our country, with dignity and respect.

He and Charlotte met at a dance, enjoyed 65 years as a married couple, they were blessed with two children and a full life. They two enjoyed traveling the worlds, shared a deep unconditional love for each other and their family and lived a faith filled life.

An avid Packers fan and season ticket holder since WWII, it’s been said that he encouraged Vince Lombardi and the team at a game –  a story he enjoyed telling. Jim lived life to the fullest.

A caring, Christian man, Jim will be fondly remembered and sorely missed by his family and friends. Jim is survived by his son James (Betsy), son-in-law Brad Dinsmoor and grandsons Trevor and Derek Dinsmoor.

Jim is now reunited with his loving wife of 65 years, Charlotte, who he loved and cared for during her journey with Alzheimer’s, their daughter Jerilyn, and his sister Janet (Jim) Moor.

In lieu of flowers, memorials appreciated to the American Council of the Blind.

To leave a condolence, you can first sign into Facebook or fill out the below form with your name and email. [fbl_login_button redirect="https://www.krausefuneralhome.com/obituary/james-kinkema/?modal=light-candle" hide_if_logged="" size="medium" type="login_with" show_face="true"]
×

In lieu of flowers, Memorials appreciated to the American Council of the Blind.