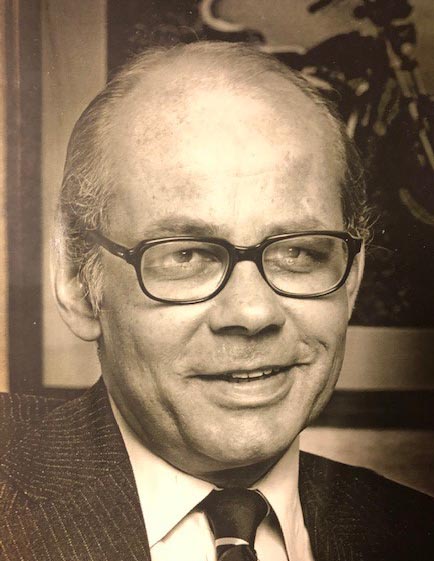 In lieu of flowers, please consider a donation to Waukesha Memorial Cardiovascular Center.Checks can be sent to ProHealth Heart and Vascular Care, 725 American Avenue, Waukesha, WI  53188 – in honor of John A. Davidson.

John died peacefully surrounded by his loving family on November 11th at the age of 84.

He was born March 28, 1935, in Milwaukee, WI to Ruth Godfrey Davidson and William H. Davidson.  He was married to Karen Christiansen in 1966.  They had two daughters, Amy (Unitan) and Carrie (Wood).

John graduated from Wauwatosa High School in 1953.  He went on to play football and earn a bachelor’s degree in economics from Lawrence College in Appleton, WI.

After college he proudly served in the US Army stationed in Fort Lee, VA and Fort Lewis in WA state.  After his service he returned to Milwaukee to work for Allis-Chalmers Manufacturing Company.

John joined the Harley-Davidson Motor Company at the age of 25 in the dealer relations department.  He went on to a distinguished 22-year career with Harley-Davidson. John held leadership roles in marketing and sales before being elected as chairman of the board and president of the Motor Company from 1973 to 1979.  He was involved in the product development planning for the Evolution V-Twin engine, a legacy that propelled Harley-Davidson forward beyond John’s time with the company. He retired in 1981 from the company.

He continued his family’s lifelong commitment to the Milwaukee community through his tireless passion of Ducks Unlimited and the Davidson Harley Charitable Fund for many years.  Behind John’s leadership the fund supported many area youth activities including the Boys and Girls Club of Greater Milwaukee, Juvenile Diabetes Research Foundation (JDRF) and Milwaukee Youth Symphony Orchestra.

He was an avid outdoorsman with many fishing and hunting trips to Canada and all over the country but never missing an opening day at Mud Lake in Fort Atkinson.  His love of nature started as a youth at Red Arrow Camp with his brother and later annual family gatherings at the Outpost at Lake Tomahawk.  He spent many sunny September afternoons listening to the Badgers and Packers from the duck blind.

One of his greatest joys later in life was spent with his family and grandchildren.  From dance recitals, hockey games, Eagle Scout ceremonies, the latest lacrosse score update, he was eternally supportive of his grandchildren and teaching them the value of kindness, humility, strong character and moral compass.  Maybe his most special time was the annual trip to northern Wisconsin with the whole family to fish, boat and relax in the beauty of the outdoors.

John was preceded in death by wife Karen J. (Chrissie) Davidson as well as his parents William H. and Ruth Davidson.

The funeral visitation will be held at Krause Funeral Home, 21600 West Capitol Drive, Brookfield, Wisconsin on Monday, November 18, 2019, from 2:00 PM – 6:00 PM.  An additional visitation will follow the next day on Tuesday, November 19, 2019, from 10:00 AM until time of service at 11:00 AM with military honors to follow at the same location.  A private family burial will immediately follow.

John’s family would like to extend a special thank you to all the doctors, nurses and staff at ProHealth Care and Waukesha Memorial Hospital who provided exceptional care for John for many years, as well as a thank you to the staff and caregivers at AngelsGrace Hospice.

In lieu of flowers, please consider a donation to Waukesha Memorial Cardiovascular Center.

Checks can be sent to ProHealth Heart and Vascular Care, 725 American Avenue, Waukesha, WI  53188 – in honor of John A. Davidson.

To leave a condolence, you can first sign into Facebook or fill out the below form with your name and email. [fbl_login_button redirect="https://www.krausefuneralhome.com/obituary/john-a-davidson/?modal=light-candle" hide_if_logged="" size="medium" type="login_with" show_face="true"]
×

In lieu of flowers, please consider a donation to Waukesha Memorial Cardiovascular Center.Checks can be sent to ProHealth Heart and Vascular Care, 725 American Avenue, Waukesha, WI  53188 – in honor of John A. Davidson.