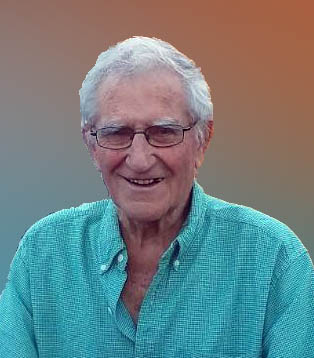 John “Fritz” Farrell, age 91, passed away peacefully on Tuesday, February 22, 2022 at Angel’s Grace Hospice with his family by his side. He was born on April 3, 1930 to the late James and Frances (nee Ehorn) Farrell on their farm near Boaz, rural Richland County, Wisconsin, the youngest of 7 children. His mother passed away when he was 2. He grew up on the farm and was baptized and confirmed at St. Phillip’s Catholic Church, Soldiers Grove, Wisconsin. As a young boy enjoyed playing lots of baseball and fishing with his older brothers when the chores were done. He had a loving companion in his beloved dog Ted, who was never far from his side. John graduated from Soldier’s Grove High School in 1947 and enlisted in the Army in 1948 and served in the Korean War. Following his honorable discharge, he began working as a deck hand & longshoreman on many ships, that sailed the Great Lakes and the far east. He met the love of his life, Isabelle “Izzy” Morton when he sailed into Milwaukee. The two of them were married on September 15, 1956 at St. Mary’s Catholic Church in Milton, Wisconsin. After a few years, they bought a house on an acre of land in New Berlin to raise their growing family. They resided in that same home for over 55 years. After a few years with R.W. Construction, John decided to strike out on his own, and with the help of his secretary & bookkeeper wife, John Farrell Mason & Cement Contractor was started. As his sons grew and became part of the business, the name was changed to Farrell & Sons. They were in business for 50 years.

John taught his children to be strong in faith and family, never take yourself too seriously and most of all the joy of a good laugh. He coached many of his son’s baseball teams and was a proud supporter of New Berlin Athletics. As the children grew, the family enjoyed many camping trips, and sometimes just pitching the tent in the backyard. They were both delighted when their children starting giving them grandchildren. As the “grands” grew, you could always find Fritz and Izzy in the stands or seats cheering on their many events. They loved to go to Las Vegas in the 70’s & 80’s. Later they took many bus trips across the country, and when the casinos opened in Wisconsin & Michigan, they often took drives to some of their favorites. Fritz was a huge Milwaukee Braves fan in his younger years & enjoyed many games at County Stadium. Later on, he preferred to watch the Brewers, Packers, Badgers and hockey matches from the comfort of his chair. He loved to read and do crossword puzzles, as he felt those kept his mind sharp. In semi-retirement, they bought some land and built their dream home in Rockbridge Township. Sadly, they never fully retired there, but they enjoyed many weeks and long weekends in that home. John loved being back “in the hills” he so dearly loved. He had a large garden there, enjoyed hunting and fishing, but most of all he loved the company of his family & friends who came to stay or visit. Many a wild euchre game was held into the wee hours around that kitchen table. He was always there to “lend an ear” or a helping hand to anyone who needed it, and to impact his wisdom of never give up and to live with a grateful, joyful heart.

The family would like to sincerely thank Angel’s Grace Hospice and East Troy Manor for their loving and compassionate care.

A visitation will be held on Tuesday, March 1, 2022 at Holy Apostles Catholic Church, 16000 West National Avenue, New Berlin, Wisconsin from 11:00 AM to 12:45 PM with a funeral mass to follow at 1:00 PM. Father Arul Ponnaiyan presiding. A second visitation will be held on Saturday, March 19, 2022 at St. Phillips Catholic Church, 42678 Church Road, Soldiers Grove, Wisconsin from 9:00 AM to 10:45 AM. Mass of Christian Burial at 11:00 AM with Monsignor Michael Gorman officiating. Burial with Military Honors immediately following mass at St. Phillips Church Cemetery. Funeral arrangements entrusted to Krause Funeral Home, New Berlin, Wisconsin.

To leave a condolence, you can first sign into Facebook or fill out the below form with your name and email. [fbl_login_button redirect="https://www.krausefuneralhome.com/obituary/john-francis-farrell/?modal=light-candle" hide_if_logged="" size="medium" type="login_with" show_face="true"]
×