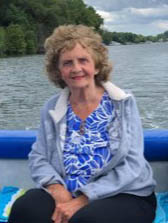 Mary Ann Bukowsky (née Moker) long time resident of West Allis, passed away peacefully on August 12, 2022 surrounded by her family at the age of 76.

Mary was preceded in death by her Brother and Sister-in-law Chuck and Linda Moker. Mary is also survived by her Brothers and Sisters Mickey, Ken (Geri), Lila (Bruce) Dave (Holly), Kathy, Doug (Lucy) Johnny(Joan), Debbie (Mark) and Tim. Also survived by sisters-in-law and brothers-in-law, Jim, Mary (Chuck), Susie (Al), Don (Sarah) She was loved by an abundance of nieces, nephews, cousins and friends.

Mary met the love of her life, Robert John Bukowsky at the tender age of 10. They were childhood sweethearts and Wed on July 18, 1964 at St . Rita’s Catholic Church. Over the years, Mary wore many hats. She attended West Allis Central High School (class of ’64), she worked at Schubert’s Restaurant, Edison Liquor, and was a Caretaker. She had an affinity to throw the best parties, loved to dance, cook, fish, and go boating with her husband and family on Lake Beulah. Mary was a funny, kind soul who lived for her family (especially her grandkids) and will be missed immensely.

To leave a condolence, you can first sign into Facebook or fill out the below form with your name and email. [fbl_login_button redirect="https://www.krausefuneralhome.com/obituary/mary-ann-bukowsky/?modal=light-candle" hide_if_logged="" size="medium" type="login_with" show_face="true"]
×