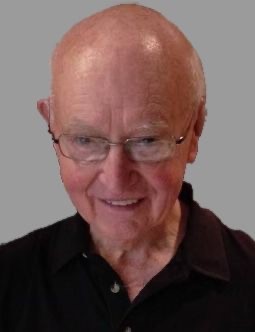 On November 5, 2020, Pastor Daniel V. Schowalter, loving husband and father, passed away at the age of 91.

Born September 22, 1929, Dan was the first born of Henry and Esther Schowalter. He grew up on a farm near Jackson, Wisconsin before attending Lakeland College. Following graduation, he attended Mission House Seminary and graduated in 1952.

While at Lakeland, Dan met Laura Koehler and they married in 1951. Their adventures started in Sheboygan, where Dan had his first call at a mission church. He later served other United Church of Christ parishes in Browntown, Kewaskum, and Milwaukee. Dan and Laura were married 46 years until her death in 1997.

Twice blessed, he married Marjorie Wickert for the next chapter of his life. In an additional 23 years of marriage, they enjoyed the last stages of his ministry, trips, and Dan’s passion for music; from singing grace to barbershop quartets. Dan loved spending quality time with his children and grandchildren, playing games, eating buttered popcorn, or sharing stories.

He will be laid to rest at Wisconsin Memorial Park in Brookfield in a private ceremony. A Celebration of Life service will be held as soon as feasible.

To leave a condolence, you can first sign into Facebook or fill out the below form with your name and email. [fbl_login_button redirect="https://www.krausefuneralhome.com/obituary/pastor-daniel-v-schowalter/?modal=light-candle" hide_if_logged="" size="medium" type="login_with" show_face="true"]
×