It’s that time again; time to pull out the elastic waist pants, pull up a chair, and partake in one of the most enjoyable meals of the year.  As we do, we reflect on the many things we have to be thankful for, and the history of this long standing tradition in American culture. 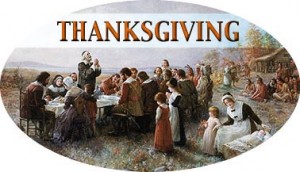 The year was 1621.  As a way of giving thanks for a good harvest, the colonists of Plymouth Plantation and members of the Wampanoag Indian tribe celebrated what we’ve come to know as “The First Thanksgiving.”

Far different from what we know today, their Thanksgiving was not just a dinner, but a feast that lasted for three solid days.  The gathering was made up of predominantly men.  There were about two Wampanoag Indians per every colonist.  Sometime in the middle of the celebration, the colonist’s took out their muskets for some target practice, and gave a small display of firepower to the Indians.  Perhaps this was to impress them, but more than likely it was a non-verbal way of stating “you may outnumber us, but we’re in charge here.”

So where were the few, but lucky women who attended the gathering?  Where else, but in the kitchen preparing the meal?  In 1692, it wasn’t turkey, dressing, and green bean casserole made with a can of mushroom soup, and topped with french fried onions.  Their dishes were far different than those we serve today.  The Wampanoags are believed to have brought five deer with them, so venison was served, along with duck, geese, and other game fowl.  Cranberry sauce?  Not likely.  If berries were eaten, they were eaten raw since maple syrup and other sugars were not plentiful.  And what about sweet potatoes or pumpkin pie?  Sorry, not on the menu.  Instead, stews with root vegetables, beans, squash and a variety of meats and seafood, like clams, lobster, and cod were served.  But through the centuries, it was the turkey that knocked out all other competitors to become the star of our Thanksgiving table.

In 1789, President George Washington proclaimed a national day of celebration “to recommend to the People of the United States a day of public thanksgiving and prayer…”  But it wasn’t until 1863 that President Abraham Lincoln officially proclaimed the 4th Thursday of every November, Thanksgiving Day.

In his speech, he said, “The year that is drawing towards its close, has been filled with the blessings of fruitful fields and healthful skies.  To these bounties, which are so constantly enjoyed…we are prone to forget the source from which they come.”

As this Thanksgiving approaches, we hope you’ll take time to remember life’s many blessings.  Even if it has been a difficult year, there are still things to be thankful for.  Be thankful for the sources of goodness be it the earth, a friend, family member, or a higher power and may the spirit of gratitude and Thanksgiving fill your heart.