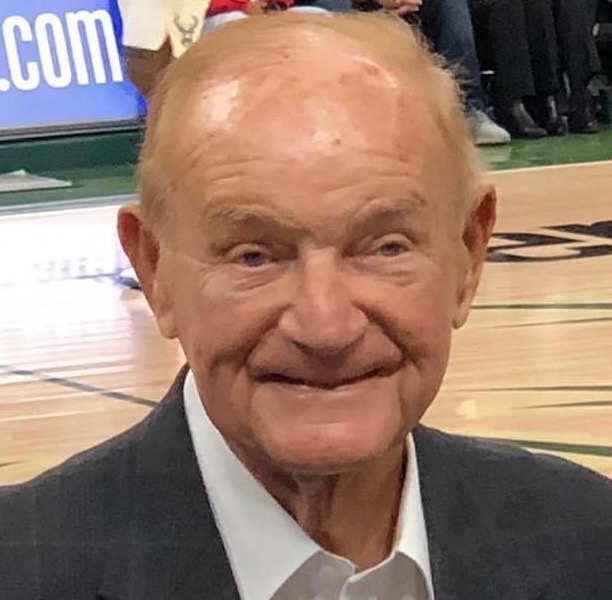 If you plan to attend the funeral service in person, the Annunciation Church asks that you please register using this simple online form https://tinyurl.com/agoc-funeral

On May 28, 2021, heaven gained its most prized angel when George J. Korkos, MD passed away peacefully in his sleep at his home in Elm Grove. He was 89.
George is survived by his children, Dr. James Korkos, Dr. Thomas (Dr. Christina) Korkos, and Kathryn (Dr. Charles) Theofilos; his eight grandchildren: Alexa Korkos, Nicole (Austin) Knapp, Demetra, George and Maria Korkos, and Stefan, Nicholas, and James Theofilos; his sister Evangeline Karioris; brother Nick Korkos; and many loving nieces, nephews, godchildren, and friends.

George was predeceased by his wife of 59 years, Penny. They are now happily reunited in Heaven dancing to their wedding song, “The Nearness of You.”

George was born in Milwaukee, Wisconsin on September 4, 1931, and Milwaukee was always home. After undergraduate education at Marquette University, George attended Marquette dental school, graduating in 1955. He then went on to get his medical degree, graduating from Medical College of Wisconsin and further specializing in plastic and reconstructive surgery at the prestigious St. Louis University Medical School. George later found his niche in facial reconstruction. He founded Plastic Surgery Associates in Milwaukee, where he practiced cosmetic surgery for over 45 years.

Outside of medicine, George stayed involved nationally. He held board positions with Heritage Bank of Milwaukee, Marshall & Ilsley Bank of Milwaukee, and Brinks Security. He was additionally appointed to the Presidential Rank Review board under President Reagan from 1980-1982.

George was a passionate Greek American and championed for the continuation of the Hellenic heritage throughout his life by bringing people together. This started with him founding the annual Telly Savalas Memorial Golf Classic in Palm Springs, California, which grew into his creation of the National Hellenic Society where he remained a board member until his death. George had an extraordinary influence on young Greek Americans through mentorship and the formation of Heritage Greece, a program that sends college students to Greece to explore their heritage. These organizations have created lifelong friendships and memories that will continue for years to come.

George was an integral part and tireless supporter of the National Hellenic Museum. He was also an early member of the Archbishop Iakovos Leadership 100 Society and served on the board of the Greek Orthodox Archdiocese. He was recipient of the Ellis Island Award, the HANAC Man of the Year, and the AHI Hellenic Heritage Achievement Award. He was bestowed the most prestigious honor in Greek Orthodoxy when he was named Archon Actuary of the Ecumenical Patriarchate and a member of the order of Saint Andrew the Apostle.

George was a self-proclaimed “sports fanatic.” One of his most cherished accomplishments was founding the Milwaukee Bucks in 1968. He was instrumental in signing Oscar Robertson and Kareem Abdul-Jabbar to the team, which ultimately led to the Bucks becoming the 1971 NBA Champions. He proudly wore his championship ring nearly five decades later. After the team was sold, George was part of the group that invested in the Golden State Warriors. Nevertheless, his heart was always with the Milwaukee Bucks. Until his death, he stayed involved with the Bucks organization and you could often find George court side cheering on the team.

George was a man who lived life to the fullest. A man loved by all. A man who lived the dream while giving back to those who needed it most. George loved to be around people. He was a lifelong member of the Milwaukee Athletic Club, where he was known for his infamous “Korkos Workout.” You could often find him hanging with the boys at Bluemound Country Club or holding court at Zisters.

George was the Patriarch of the Korkos family and lived for their happiness. He was so proud of his children and grandchildren, and George always made sure he was there to support their accomplishments and celebrate their successes. He will always be remembered as the ultimate Papou and the most loving father. We will miss you but we will see you again somewhere over the rainbow.

If you plan to attend the funeral service in person, the Annunciation Church asks that you please register using this simple online form https://tinyurl.com/agoc-funeral .

To leave a condolence, you can first sign into Facebook or fill out the below form with your name and email. [fbl_login_button redirect="https://www.krausefuneralhome.com/obituary/george-j-korkos-m-d/?modal=light-candle" hide_if_logged="" size="medium" type="login_with" show_face="true"]
×

If you plan to attend the funeral service in person, the Annunciation Church asks that you please register using this simple online form https://tinyurl.com/agoc-funeral