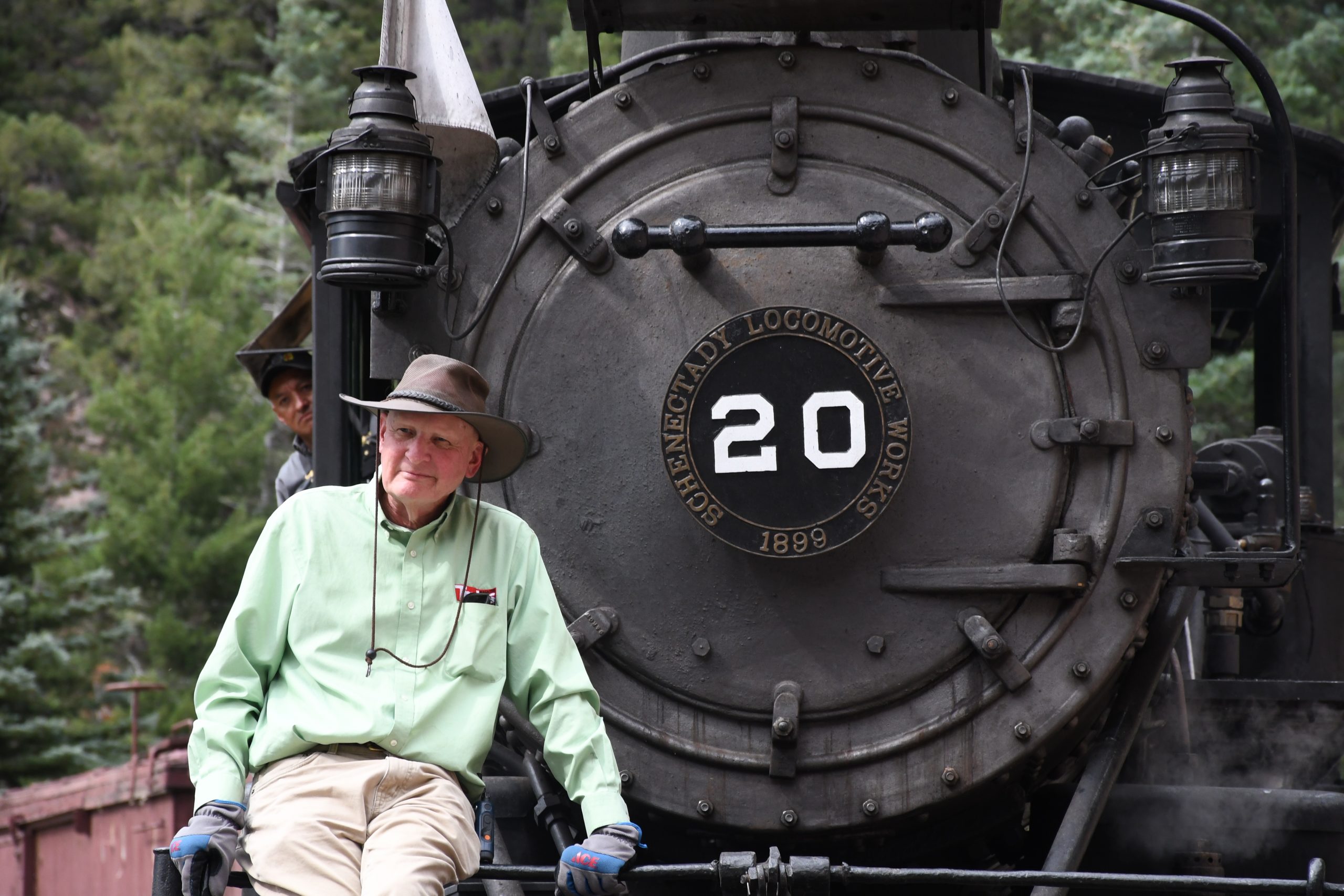 James G. “Jim” Wrinn, 61, passed away peacefully at his Brookfield, Wis., home after a courageous, year-long battle with pancreatic cancer.

Born to John and Kate Wrinn in Franklin, N.C., Jim grew up an only child and with parents who were both retired by the time he was a teen. His father was an agricultural agent for Macon County while his mother was Clerk of the District Court until she had Jim when she stepped down in that role. Much of Jim’s good nature and compassion came from his parents, whom he adored.

Jim’s love of railroads can be traced back to his parents who took him all over the South to attend various railfan events, tourist trains and museums, including the nearby Graham County Railroad near Robbinsville, N.C. His father’s family also was involved in railroading with his dad’s brother working a Railroad Post Office car and his third and second great grandfather’s having lived in Old Fort, N.C. as contractors helping to build the railroad lines nearby.

To help build his vocabulary, his second-grade teacher advised Jim to read more. Jim purchased his first copy of Trains magazine from a rack at the tourist railroad he had recently visited. It was the August 1967 issue and had a Shay steam locomotive on the cover, which looked like the Shay he had just ridden. The cover story was written by who would become his main mentor, Dan Ranger. Having read it cover to cover, Jim’s parents purchased him a subscription for Christmas. And, thus, his lifelong relationship with Trains magazine began.

A few years later, his mother bought him his first 35mm camera solely so that he could have decent enough pictures to submit to Trains magazine to get published. Jim’s first picture in Trains was finally published in 1982, appropriately of the Graham County Railroad’s Shay #1925.

During his freshman year in college, an advisor asked Jim what would he like to do in life. Jim said to be Editor of Trains magazine. The advisor then directed him to attend the journalism program at the University of North Carolina at Chapel Hill. In 1983, he graduated as a Tar Heel with majors in journalism and political science. Until the day he passed, his friendships with his fellow Tar Heel alumni helped him to focus on being the best journalist he could be. He had great friends with which to cheer on his adored Tar Heel basketball team!

After graduation in 1983, he worked for several North Carolina small-town newspapers including in Gastonia and Fayetteville. He made his big move to the Charlotte Observer in September 1986. Jim covered several departments until landing his dream job at Trains magazine, the world’s largest-circulation railroad periodical, in October 2004. His start date…10/27…same as the company’s old address in downtown Milwaukee and a running theme within the railfan community.

Jim was active in multiple rail-preservation projects throughout his life. In 1986, he helped to found the Southern Railway Historical Association. Perhaps most notably though he was a volunteer and leader at the North Carolina Transportation Museum (NCTM) for nearly four decades. He worked every job there as a volunteer, later serving on the board. His biggest achievement he would say was his work to secure and restore Graham County Shay #1925 at the museum.

Throughout the past several years, Jim authored, or co-authored five books, including a history Spencer Shops steam locomotive repair facility where the NCTM is located today, and a history of the Southern Railway and Norfolk Southern Steam Program, entitled “Steam’s Camelot.” He was putting the final touches on a book chronicling the rise and fall of the Graham County Railroad at the time of his passing. That book is scheduled for release later in 2022.

As told to Cate and others, Jim’s greatest regrets were not being able to retire from Trains and subsequently not serving as President of the NCTM.

Jim was a humble man who was just as comfortable having dinner with a railroad CEO as he was a brakeman. He never had a bad word to say about or to anyone. Instead, he lifted people up with his encouragement and support. He took great pride in helping people no matter if they were at the homeless shelter he helped serve food at or a railroad organization desperately needing funds to finish a locomotive restoration.

There was no doubt though, Jim’s greatest talent was, to use his words, plotting and scheming. Behind the scenes was where Jim’s touch was most often felt. Cooking up ideas for different locations, equipment, people, facilities…anything to make you shake your head and wonder ‘How did THAT happen?’ is what he enjoyed most! And it is what he would want each of you to do yourselves…plot and scheme.

Through the past nine years, Jim and Cate were frequently spotted together along the rails. They were true partners often being seen together trackside with their respective cameras. Having been married on Cate’s father’s private railroad car the ‘Cornhusker Club’ on display at the Durham Museum in Omaha in 2014, Jim married into Cate’s railroad family that spanned generations. Jim had even met Cate’s father Bill Kratville on Bill’s private train car 10000…decades before he even met Cate. Bill had written for Trains magazine starting in the 1950s. He subsequently wrote several railroad books that sit on the shelves at Kalmbach Media. Their meeting at the Center for Railroad Photography and Art conference seemed like destiny.

Jim learned from his mentors and, in turn, purposely reached out to mentor younger people to get involved in railroads either railfanning, writing, photography, restoring, marketing, organizational leadership, fundraising…you name it. Jim knew it was his responsibility to teach the next generation of railroad enthusiasts, journalists, workers and volunteers. His advice to each of you would be to do the same to keep the industry fresh, vibrant, modern and thriving! Help to train your replacement he would say! Through his hard work and generous spirit, Jim touched the lives of countless thousands of rail professionals and hobbyists.

But as he struggled with cancer, he would often remark he was lucky enough to lead what he called “an interesting” life, both professionally and personally.

Jim’s advice to each of us….get busy livin’!!

To leave a condolence, you can first sign into Facebook or fill out the below form with your name and email. [fbl_login_button redirect="https://www.krausefuneralhome.com/obituary/james-g-wrinn/?modal=light-candle" hide_if_logged="" size="medium" type="login_with" show_face="true"]
×