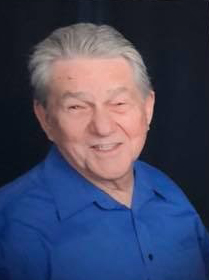 Leo was born on January 11, 1933, in Thorp, WI to Edward Leonard and Clarissa Emma (Pierce) Bogumill.

In 1956 he met LaVerne Thoms and they married on February 15, 1958, in a civil ceremony at the courthouse in Waukesha, WI.

Leo dropped out of high school his senior year to join the Air Force in 1950, honorably discharged at the rank of Sergeant in 1954. He worked at Ray-O-Vac battery company in their IBM data processing dept in Madison for two years after returning to civilian life. Tried working for Northwestern RR in Chicago for a few months before moving to Madison to work in the U. of W. Bursars office for a year. From there he moved to Milwaukee and worked at the General Merchandise Co. (later to become JC Penney Catalog Div.) in 1956 as an IBM machine operator and left there in 1959 as a section supervisor. That is where he met his future bride, LaVerne. Leo joined the City of Milwaukee in 1959 when they were converting their property tax collecting to automation. He worked there through many changes and retired in 1990 at the age of 57 having held the title of Computer Operations Supervisor for 25 years.

Leo was an avid bowler, golfer, and member of the Men O Harmony barbershop chorus. He greatly enjoyed extensive travel vacationing with his wife and visiting extended family across the country. Leo also enjoyed playing the organ, the piano, singing in church choirs, volunteering at and attending the theatre as well as many concert venues. He valued the time he spent with his entire family throughout his lifetime. Leo was a favorite Uncle for many nieces/nephews and great-nieces and nephews.

Leo’s family wants to thank the staff at Azura Memory Care, Oak Creek, and the hospice folks who took very good care of him.

In lieu of flowers, please consider a donation to the Alzheimer’s Association.

To leave a condolence, you can first sign into Facebook or fill out the below form with your name and email. [fbl_login_button redirect="https://www.krausefuneralhome.com/obituary/leo-e-bogumill/?modal=light-candle" hide_if_logged="" size="medium" type="login_with" show_face="true"]
×