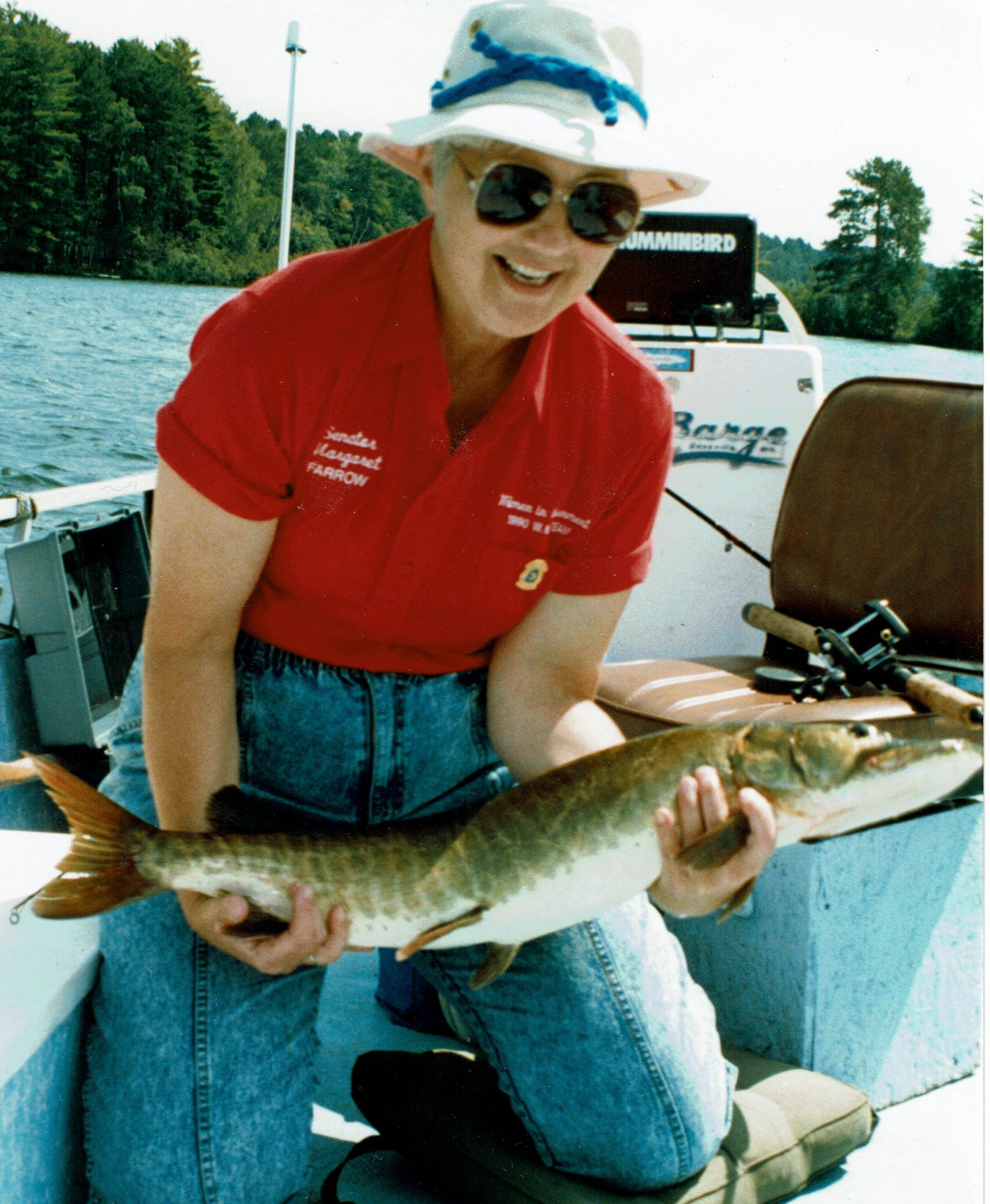 In lieu of gifts, family asks that donations be made to Racine St. Catherine’s High School Building Fund, or the Margaret Farrow Scholarship Fund through WisconsinEye, in care of the Waukesha County Community Foundation.

Lt. Governor Margaret Ann Farrow, of Pewaukee, was peacefully welcomed into the arms of the Lord on March 8th, 2022 at her home in Pewaukee, Wisconsin. She was 87 years old.

Born to William and Margaret (Horan) Nemitz on November 28, 1934 in Kenosha, Wisconsin, she enjoyed an active youth, spending her summers in Wisconsin’s beautiful Northwoods. Eventually her parents built a cabin in Oneida County that remains a treasured retreat for the family. Her love of fishing was spawned there at an early age. After graduating from St. Catherine’s High School, in Racine, Wisconsin, Margaret attended Rosary College for one year. She earned a bachelor’s degree from Marquette University with a major in political science and minor in elementary education. In 2008, Marquette University conferred an Honorary Doctorate of Law on Margaret.

It was at Marquette that she met the love of her life, and husband, John. They were married the December after they graduated, while John was serving as an officer in the United States Navy. They recently celebrated their 65th wedding anniversary.

Her lifetime of service began in education, but she soon was drawn into other areas of service. While raising their five sons, Margaret was very active in church and community activities. This work led her to more formal public service, starting with her election to the Elm Grove Village Board in 1976, and then election as Village President in 1981. She was elected to the Wisconsin State Assembly in 1986, and the State Senate in 1989. In the Senate she eventually served as Assistant Majority Leader, until being appointed as Wisconsin’s 42nd Lieutenant Governor in 2001. She was the first woman to hold the position. Her State service concluded with a term as a member of the UW Board of Regents from 2013 to 2017.

Margaret was a tireless leader, traveling the state and serving on numerous boards, commissions and task forces, and holding key roles in tax policy reform, welfare reform, economic development, women’s issues and government efficiency reforms. Perhaps her proudest legislative achievement was one of her last initiatives: her effort to democratize access to meetings and activities of the Legislature through the creation of WisconsinEye, a non-profit, independent State Capitol broadcast network that provides coverage of the Wisconsin Legislature, Supreme Court, Executive Branch, and civic events across the state. She served on the WisconsinEye Board of Directors since its creation in 2001, only recently stepping down as Chair.

Her life of service was not limited to public work. Margaret was very active in her church and community as well, notably serving the Archdiocese of Milwaukee for decades on numerous committees. Other boards and roles with local non-profit entities are too numerous to mention. Recently, Margaret valued her time on the Board of Directors of Acuity Insurance.

Margaret enjoyed fishing and sailing with her family, and quilting with her friends. She especially enjoyed muskie fishing with her sons, daughters-in-law, and grandchildren, often participating in muskie tournaments around the state. Her love of her home state of Wisconsin was evident in everything she did, and communicated proudly to all through her license plate, “WI A 10,” which she had for over 30 years.

Above all else Margaret was a loving wife, mother and grandmother. Nothing prompted her to light up more than proudly sharing stories of her family. Somehow she could juggle all of her commitments and still show up anywhere in the state for soccer games, concerts, other school events, or to take care of grandchildren.

Margaret is preceded in death by her parents, and her brother and sister-in-law, William (Dorothy) Nemitz. She is survived by her loving husband John, sons John (Linda), William (Constance), Peter (former wife Michelle), Paul (Amy), Mark (Amy), and ten grandchildren.

Special thanks for the care provided by the wonderful staff at Touching Hearts at Home, and Preceptor Home Health and Hospice.

In lieu of gifts, family asks that donations be made to Racine St. Catherine’s High School Building Fund,

the Margaret Farrow Scholarship Fund through WisconsinEye, in care of the Waukesha County Community Foundation.

To leave a condolence, you can first sign into Facebook or fill out the below form with your name and email. [fbl_login_button redirect="https://www.krausefuneralhome.com/obituary/margaret-ann-farrow/?modal=light-candle" hide_if_logged="" size="medium" type="login_with" show_face="true"]
×

In lieu of gifts, family asks that donations be made to Racine St. Catherine’s High School Building Fund, or the Margaret Farrow Scholarship Fund through WisconsinEye, in care of the Waukesha County Community Foundation.