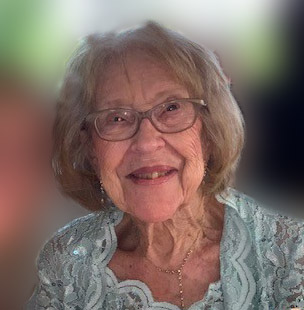 Marian Hoesly reluctantly passed away on July 1, 2021. We say reluctantly, because Marian always thrived on being a part of activities and social life at Heritage Place in Brookfield, WI, where she resided for the last 13 years. Between her “Old Fashions” group of ladies, her serial bridge games, and trying to lose at bingo (she didn’t want people to resent her if she won too often), Marian could usually be found where the gathering was happening. She was always happy to share her ‘winnings’ from bridge which usually totaled less than $1. Marian was born to the late Reginald Barnes (Doc Barnes) and the late Dorothy Volk on October 20, 1925, in Greenwood, Wis. Being a product of the depression era, she and her late husband Irven Hoesly were always careful with their money. I think we’d all like to witness when Marian is reunited with Irv and how proud she will be to tell him that in fact she did not, “piss it all away”.

The eldest of three siblings, (Kathleen Landini and Joan O’Neill), Marian was always the connector and framer of things in a positive light. The word “No”, was never a part of her vocabulary. “Maybe”, “we’ll see”, “that would be nice”, “that’s interesting”, were all phrases that we learned to translate as “no, I wouldn’t want that.”
For years, Marian worked at the Pilgrim Square Candle Shop where we feel confident every penny she earned was ‘reinvested’ back in the beautiful holiday decorations she shared with us.

Even though the kids always looked forward to the summer family vacations at Blueberry Lake, Marian’s day was filled with cooking, cleaning up, babysitting, cooking again, cleaning up, repeat. She loved it. Somehow taking care of all of us was one of her greatest pleasures.
Even though she would never think of doing anything against the rules, with her grandchildren and great-grandchildren, Marian wasn’t above bribery, and you could count on her having candy tucked away to sneak out and share.

There will be a noticeable sadness as we miss Marian’s cut-out cookies, home-baked beans, and Chocolate Angel Food cake. For years her daughter-in-law beat dozens of eggs in repeated attempts to duplicate Marian’s perfect Chocolate Angel Food cake. Not sure why after 30 years of failed effort, Marian took pity on her and confessed that she always used a box mix and just added cocoa powder. Marian’s baking though was distinct in that there always was a mysteriously missing corner cut out of everything she baked.

If only Marian could have written this in her own hand, as those who received one of her over 100 Christmas cards can attest, her penmanship was so beautiful. But more than her script, were the delightful personal messages she wrote for years.

Marian will be so missed and her smile will cheer us all as we move through our daily lives bumping into our memories of so many ways she shared her light with each of us.

Private family services will be held in Greenwood, Wisconsin and at Heritage Place in Brookfield.

To leave a condolence, you can first sign into Facebook or fill out the below form with your name and email. [fbl_login_button redirect="https://www.krausefuneralhome.com/obituary/marian-hoesly/?modal=light-candle" hide_if_logged="" size="medium" type="login_with" show_face="true"]
×