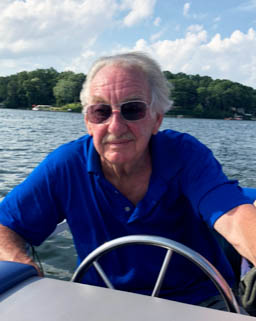 Robert John “Bob” Bukowsky, lifelong resident of West Allis, passed away at his home with family by his side,  after a 15-month courageous battle with Mesothelioma Cancer.

Bob was born October 12, 1945 in Milwaukee to Agnes (née Ziebert) Bukowsky and Edward (Hans) Bukowsky. Bob was preceded in death by his loving wife, Mary Bukowsky ( née Moker) of 58 years.

Bob attended West Allis Central High School (class of ‘63), worked as a mechanic, carpenter, and retired as a proud Teamster (local 200) Truck driver. After retirement Bob went back out to the workforce and worked for Dueco and traveled the country. He also worked for Prescriptions Plus until Mary fell ill and he became her full time caregiver.

Bob was a devoted family man, and enjoyed boating and fishing on his pontoon boat on Lake Beulah. He was known to love his Green Bay Packers, Milwaukee Brewers, Frank Sinatra music, gameshows, and playing slots. He could also grill a mean steak. He was a character who loved to share many stories of his adventurous childhood, and he taught his family to love selflessly and live humbly. He will be missed immensely. The world was a better place with him in it.

To leave a condolence, you can first sign into Facebook or fill out the below form with your name and email. [fbl_login_button redirect="https://www.krausefuneralhome.com/obituary/robert-john-bukowsky/?modal=light-candle" hide_if_logged="" size="medium" type="login_with" show_face="true"]
×