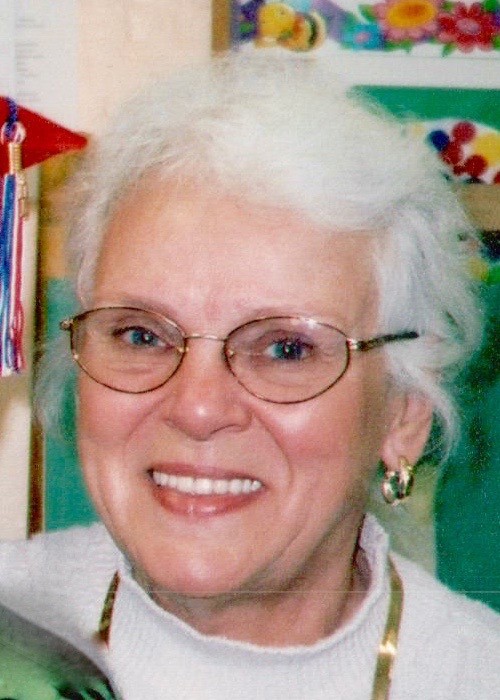 Shirley, the oldest of four children, was born in Loyal, Wisconsin. Shortly after her birth, her family moved to West Allis, Wisconsin. Shirley attended Lane elementary school until the family moved back to Loyal in 1946 when Shirley was 12 years old.

Shirley enrolled in gymnastics and quickly became proficient in “no-hand” walk-overs, cartwheels, and flips. This gave her confidence. In Loyal, she attended St. Anthony’s Catholic School before graduating to Loyal High School.

From 1951-1975 she was married to Edward Shefchik, and together they had six children. She loved her children dearly. Her two oldest sons, Dennis and Gary, served in the military, Army and Air Force, respectively, which weighed heavy on her heart every day they were away. She spent time with daughters Kay and Carol, teaching them how to bake, sew and keep house. Losing their fourth child Debbie at just seven weeks, and youngest son Dale at 49 years, was devastating.

Shirley & Ed moved to Milwaukee in 1952, where Shirley devoted her life to raising her children and managing the home. Ed worked long hours on the police department placing child-rearing on her shoulders. She was protective, ensuring her children were safe whether playing outside or sitting in a dentist’s chair. Shirley taught Christian values, embracing honesty and doing the right thing.

Shirley went all out at Christmas to make the holiday special for her family. She loved Jesus, and she loved Christmas! She and the girls would bake dozens of cookies, and she made sure everyone got a special gift under the tree. In the ’70s, she worked for a few years as a “flyer” at Capital Court clothing store during the holiday to get a discount on purchases, allowing her to put more packages under the tree. While she had expensive taste, she also knew how to shop the sale rack.

Shirley was health-conscious, a great cook, creative, and hard-working. Feeding her family healthy meals and making her home beautiful were passions. She found joy in every task, but her artistic spirit loved making things beautiful. She had no fear of tackling a project, large or small. What she didn’t know, she would teach herself through reading, or trial and error, including hanging drywall, wallpaper, refinishing woodwork, recovering furniture, decorating bedrooms, or sewing sample carpet squares together to make thrifty patchwork carpets.

In her late 40s, as the children became more independent, Shirley went to work at Pick & Save in the Customer Care department as the person who solved problems. Although Shirley continued to devote much of her time to remodeling projects, she was not one to pass up polka music. She dedicated time to ballroom dancing, soon becoming queen of the dance floor with the Waltz, Cha-Cha, Somba, Rumba, Swing and even the Polka Hop. At this stage in her life, she lived to dance. It was on the dance floor where she met Allen, who became her devoted life partner for 40 years. They danced through life until the last few years until Shirley’s health declined. She will be missed.

To leave a condolence, you can first sign into Facebook or fill out the below form with your name and email. [fbl_login_button redirect="https://www.krausefuneralhome.com/obituary/shirley-m-shefchik/?modal=light-candle" hide_if_logged="" size="medium" type="login_with" show_face="true"]
×