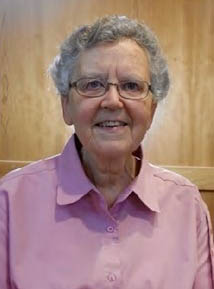 Sister Jane Eschweiler was born June 22, 1947, one of two daughters born to Gilbert and Teresa (Kern) Eschweiler in Milwaukee, Wisconsin, archdiocese of Milwaukee.

She grew up in Milwaukee near Mother of Good Counsel Parish. She attended elementary school there and Divine Savior High School. Both schools were staffed by the Salvatorian Sisters. Consequently, she felt her call to the Sisters of the Divine Savior early in her life. She stated that “The prayer life, community living, and apostolate of this order have attracted me since the lower grades.” She also had three aunts who were members of religious communities and three uncles who were priests, so she was always in close proximity to priests and religious all her life.
On September 12, 1965, Jane entered our community and the novitiate a year later, in 1966. She professed her first vows on August 13, 1968, and final vows on August 1, 1976, in Milwaukee.
Sister Jane received her BA in English literature and a minor in sociology from Marquette University in 1968, and in 1975 did graduate work in English literature at the University of Wisconsin.
In 1970, Sister Jane began her ministry as an English teacher at Divine Savior High School in Milwaukee, then Dominican High School in Whitefish Bay, Wisconsin. She had a desire to preach the Word rather than teach English. She chose to assist at the Tutweiler clinic in rural Mississippi, acting as receptionist, insurance clerk, and account-keeper. At this time, she also did prison ministry at Parchman State Penitentiary. This is where she first began to preach and lead prayer services. From there she went to Clarksdale, Mississippi, where she taught in a four-room school for African American youth. Still among the poor, she served as a Resident Pastoral Minister in Booneville. After Mississippi, she taught at the Academy of Our Lady High School in South Chicago, Illinois.
In the late 1980’s it became clear to Sister Jane that she strongly desired to teach the Word. Therefore, she went back to Mississippi where two small parishes needed a pastoral and administrative leader. She was now where her heart desired to be, as she stated in her autobiography, where she “preached, led Eucharistic services, wrote the parish bulletins, engaged with leaders of other Christian faith, shared hospital chaplaincy, and did RCIA and pastoral work for the Infant Jesus of Prague Parish in Boonville and its mission, St. Mary’s in Iuka.”

In 1990, she moved back to the Midwest and served on the Pastoral Team at St. Andrew Parish in Saginaw, Michigan, for five years. While at St. Andrew’s she served on the Diocesan Ecumenical Commission and the Diocesan Task Force on Adult Faith Formation. To continue in this ministry, she studied at the Institute for Pastoral Life in Kansas, St. Norbert’s in De Pere, Wisconsin, Aquinas Institute in Dubuque, St. Louis University, Notre Dame University and then went to Loyola University in Chicago to study for her MA in pastoral studies, graduating in 1996. While studying there she wrote her first book entitled: Endless Connections: Taking God’s Word to Heart, a book of her homilies published in 1997. Sister Jane’s other
publications include another book entitled Seven Women to Nurture Spiritual Renewal: An Accompanied Adventure, and a number of journal articles and newsletter contributions.
In 1996, Sister Jane was elected to the Provincial Team of the North American Province and in 2000, she returned to parish pastoral work at Sacred Heart Parish in Mount Pleasant, Michigan. After three years she was asked to move to Tucson, Arizona, to join the Jordan Ministry Team representing the Sisters in this collaborative ministry. She found the Jordan Ministry Team creative and challenging. Her greatest satisfaction was “doing direct God work in parishes and with the Jordan Ministry Team.” She became the Director of the Jordan Ministry Team in 2005 and served in that role until the Spring of 2013. As part of this ministry, besides her office work, she traveled to schools, parishes, hospitals, and prisons where she conducted classes, retreats, and workshops for future lay leaders, deacons, youth ministers, catechists, and Catholic school teachers. Experiences that broadened her vision of Salvatorian women and men elsewhere included giving six-day retreats in Villoonni, Bangalore, and Assam, India, and teaching English in Tanzania, East Africa.

Although Sister Jane had multiple health issues beginning with a diagnosis of Hodgkin’s Leukemia in the early 1970’s, she remained vibrant and active in ministry throughout her life. Sister Jane had serious back surgery in Milwaukee in July, 2013. She returned to Tucson in mid-October and gradually returned to her work at Jordan Ministry. She retired from Jordan Ministry in 2016, and assembled a variety of part-time teaching, writing, and pastoral ministries to fill her days. Over the next several years, even as her health issues increased, she continued to do spiritual direction, conducted worship services at the prisons, participated in the permanent deacon formation program, and volunteered with the adult formation program in her parish. Diagnosed with congestive heart failure, Sister Jane returned to Milwaukee in October, 2021, to receive the increased health care she needed. Living at Salvatorian Sisters Residence, she again continued her ministries of spiritual direction, worship, preparing and leading prayer services and discussion groups. Late in May, 2022, after undergoing another heart procedure, she asked to be placed on hospice care.
Sister Jane died peacefully on June 9, 2022, with her niece, Deb Cassel, at her bedside. The Sisters from Salvatorian Sisters Residence gathered in her room, along with Sister Beverly Heitke, Provincial Leader, and Jane Gamez, RN. They sang and prayed as Jane made her journey home to God. Her beloved uncle, Father Ed Eschweiler, her friend, Kathy Sheehan, and Sister Virginia Honish also joined the group. She was 74 years old and professed for 53 years. May she now enjoy the presence of the God she walked with throughout her life.

To leave a condolence, you can first sign into Facebook or fill out the below form with your name and email. [fbl_login_button redirect="https://www.krausefuneralhome.com/obituary/sister-jane-eschweiler/?modal=light-candle" hide_if_logged="" size="medium" type="login_with" show_face="true"]
×