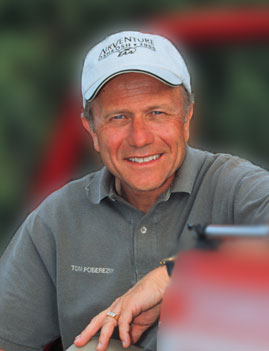 Tom Poberezny, a champion aviator, longtime leader of the Experimental Aircraft Association (EAA), and a National Aviation Hall of Fame member, died on Monday, July 25, at age 75 following a brief illness. His death came on the opening day of EAA AirVenture Oshkosh 2022, the world’s largest fly-in convention that he guided into becoming America’s aviation festival during his 35 years leading the event.

Thomas Paul Poberezny was born on October 3, 1946, to Paul and Audrey (Ruesch) Poberezny in Milwaukee, Wisconsin. His childhood was spent in the Milwaukee area and he was a graduate of Whitnall High School. Tom earned a degree in industrial engineering from Northwestern University in 1968, but missed his college graduation ceremony because he was flying in an aviation aerobatic competition. He married Sharon Mathson on April 27, 1974, and together they enjoyed 48 wonderful years of marriage.

Tom also earned his own outstanding reputation as a pilot. He was a member of the U.S. National Unlimited Aerobatic Team that captured the World Championship in 1972. The following year, he won the U.S. National Unlimited Aerobatic Championship. He subsequently flew for 25 years as one wing of the legendary Eagles Aerobatic Team (originally the Red Devils), the most successful civilian precision flying team in history prior to its retirement from air shows in 1995.

By the late 1960s, Tom returned to join EAA full-time, becoming part of the organization founded by his father in 1953. His responsibilities grew quickly as by the mid-1970s, he was named chairman of the EAA Fly-In Convention, a role he would hold for nearly 35 years. Over that period, the EAA fly-in grew from a gathering of recreational aviators to a worldwide showcase for all facets of flight. Aircraft attending what is simply known as “Oshkosh” by pilots included the Concorde supersonic airliner, the SpaceShipOne civilian spacecraft, and the F-117 Stealth fighter jet.
During his career with EAA, Tom led a number of the organization’s milestone events. In the late 1970s, he spearheaded EAA’s first major capital campaign, which supported construction of the current EAA Aviation Center headquarters and museum complex in Oshkosh, Wisconsin. That combined the EAA offices, museum, and fly-in grounds at a single location. In 1989, Tom was elected EAA president, succeeding his father. Tom would hold that position for more than 20 years and added the Chairman of the Board role in 2009.

In 1992, he led the creation of EAA’s Young Eagles, which has become the most successful aviation youth program in history. Realizing the importance of mentoring to the future of aviation, EAA aimed to give one million kids between the ages of 8 and 17 an airplane flight by the centennial of powered flight on December 17, 2003. Tom flew the first Young Eagles flight at Oshkosh on July 31, 1992. The one millionth Young Eagle was flown in October 2003, and the Young Eagles Program has continued, this year celebrating its 30th anniversary having flown nearly 2.3 million young people.

In 2002-2003, Tom played a pivotal leadership role in the national centennial celebration of flight. He was a member of the Centennial of Flight Commission, a six-person board empowered by Congress to coordinate and publicize the nation’s commemoration of the Wright brothers’ historic first flight. At the same time, he led EAA’s Countdown to Kitty Hawk program, which commissioned the construction of the first completely authentic reproduction of the 1903 Wright Flyer – the airplane that gave birth to powered flight. The airplane successfully flew at Kitty Hawk, North Carolina, in late 2003 and was present on those hallowed grounds on December 17, 2003 – 100 years to the minute from the Wrights’ first flight.

Tom also spearheaded EAA’s leadership role for a decade in urging the FAA to create the sport pilot/light-sport aircraft categories, until the FAA announced the Sport Pilot/Light-Sport Aircraft rule in 2004. He continued to serve as well as serving as an ardent spokesman for the importance of general aviation as essential to the national transportation system and a unique expression of personal freedom.

After his retirement from EAA in 2011, Tom continued to work with other aviation organizations and companies in various roles from advisor to board membership. His aviation legacy was further established with his induction into the National Aviation Hall of Fame in Dayton, Ohio, in 2016.

Tom is survived by his wife, Sharon; his daughter, Lesley (Mark) Rommelfaenger and her stepchildren, Lily and Kayden; One sister, Bonnie (Chuck) Parnall; and numerous nieces and nephews.

To leave a condolence, you can first sign into Facebook or fill out the below form with your name and email. [fbl_login_button redirect="https://www.krausefuneralhome.com/obituary/thomas-poberezny/?modal=light-candle" hide_if_logged="" size="medium" type="login_with" show_face="true"]
×